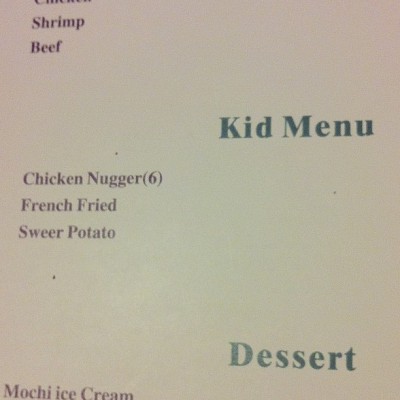 You sit at the restaurant with your young son, he says he is hungry. You agree to get him dinner. You open up to the kids menu, your child is far to young for adult food. Chicken nugger stares at you from the page. You don’t understand. Your palms get sweaty and your son complains. He says he is hungry. Your mind strains, searching for an answer in a world of sweer potato and french fried. You try to order the chicken nugger, but you cannot. The words cannot escape your lips. Your son is hungry, he complains. The waitress stares at you, her head a spinning chicken nugger, her arms swinging french fried. Your son cries the tears of a chicken nugger-less child. In your mind you scream. It is raining sweer potato now, you have french fried engraved on your left temple and you do not understand. Your son weeps in the corner, he is starving. Starving for the chicken nugger.

You watch as your son scarfs down nugger after nugger. He is satisfied. He loves the chicken nugger. You wonder if you could ever attain that kind of happiness in your own life. You quietly pay your bill and enter the street. Your son asks if you can buy him an ice cream. You enter Mrs. Moo’s on Jefferson street hoping to order a rocky road. You look at the menu on the wall.

It goes on and on. You are confused. Your son asks again for the chicken nugger. He is full but wants chicken nugger for dessert. You ask the woman at the counter for a scoop of rocky road. She doesn’t know how to respond. You get desperate, you ask for vanilla. Her eyes widen. She motions her way toward the telephone. You ask again, “a scoop of vanilla?” She picks up the phone and begins dialing. Your son again asks for chicken nugger. You want to run, you want to scream, you look at your palms and the lines have begun to form chicken nugglets. The phone the woman is dialing starts sweating chicken grease, her eyes close and she is ashamed, ashamed that she her customer has caused such a problem. You want to run but your son is screaming for the chicken nugger.

You sir have just gotten yourself into a reality war, are you ready?

The waitress makes her call and collapses into chicken nuggers, grease rolling from where her body had stood. You look up to the menu on the wall, but the words have tumbled off the paper and have conjeeled as mustard on the floor. You turn to your son, his eyes flaming mirrors of your own reality. The rain has turned to hail, currents of sweer potato break the glass windows in the shop and sirens yell in the distance. You try to cover your eyes, but your hands are no longer yours, they drip grease and melt into a familiar form. Your hands are chicken nuggers. You scream.

you watch yourself from above as you become chicken nugger. Your son collapses into a quivering sweer potato as the universe fold in on its self to form a massive french fried. Your son is now screaming from his forehead for a chicken nugger and the space time continuum ceases to exist and in its place is a toasty nugger. you try to scream for chicken nugger but all your mouth will produce is sweer potatat. In japan, your hundreds of children mime to you their deep need for chicken nugger, and you demand a lawyer to defend you. The planets, all of them, mercury through pluto, crash to earth and are reduced to a myriad chicken nugger. Death comes for you. you hope to go to a better place but there is only chicken nugger.

You hope for salvation but get salivation instead. Surrounding you is not the purity of heaven of the fire of hell, but rather the greasy exterior of the chicken nugger. The universe has collapsed, the big bang echoing as the sound of french fried hitting concrete. All life is gone, and all that remains is a steaming bowl of confusion.